On a sunny Spring morning around half way through our pedal around Europe with two dogs, we rolled into Montpellier hungry and ready for second breakfast. By the natural process of cheese-mosis we gravitated towards the market lanes, filled with delicious aromas, rows of fromage, and sickeningly stylish French people speaking their sickeningly seductive language.

But something on the fringe of the marketplace caught our eye. A bike. A big, long bike. In an acknowledgement of big  bike solidarity in the land of the petite, the rider coasted over to say “bonjour”. He was a friendly fellow, built like an ATM with a barrel chest that bulked out his ‘Rock the Bike’ t-shirt.

It turned out that the rider was Benjamin Sarrazin, the founder of the bike company Yuba, who was seeking French distribution for his Mundo cargo bike. It’s a small world.

At around the start of the millennium Ben was in California helping to start Xtracycle, whose revolutionary frame extension effectively lengthens the wheelbase of a an average bike, transforming it into a longtail cargo hauling beast, reminiscent of an old Dutch twin bike. After working at Xtracycle for several years Ben felt that the add-on design was not sturdy or durable enough for the long haul, so he left and founded Yuba, enlisting the help of top frame builders and designers to create the ‘Mundo’, perhaps the sturdiest longtail cargo bike on the market. 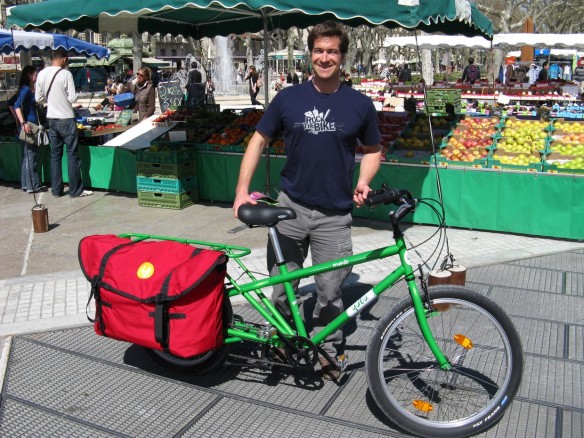 The first thing I noticed about the Mundo was that it was so fat it was bordering on phat! The solid, oversized radioactive green steel tubing was fitted out with a fat padded seat, Schwalbe Fat Frank balloon tires, a reinforced 48-spoke back wheel with a huge 14mm axle, and a fat fire-engine red courier bag. Next to my Surly Big Dummy it didn’t look particularly elegant, but it certainly looked rock solid and full of good cheer.

The bike was partly inspired by Ben’s travels in the developing world where he noticed that bicycles were an important part of lives and livelihoods, but were made using poor quality parts, too weak for consistently hauling heavy loads. Consequently the Yuba Mundo is designed to promote affordable, scaleable transportation for cargo and people – whether it be replacing a mini-van in an Australian city or lugging coffee beans in Africa.

So just how much can the Mundo haul? When Ben took part in the 4th Annual Supermarket Street Sweep (a bike race that benefits the San Francisco Food Bank by collecting food from local supermarkets) he crossed the finish line with 150 kg/330 lbs of rice plus a passenger. The total cargo weight of the food, passenger, and rider was 315 kg/695 lbs – considerably more than the 200 kg/440 lbs cargo capacity stated on their website.* 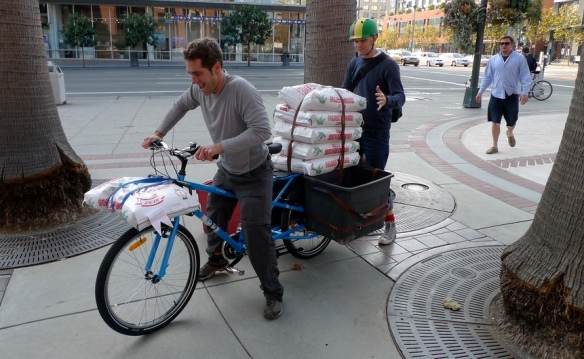 When I asked Ben how it felt to ride with so much weight, he said it felt “easy, except for the hills, and totally stable”. Other Yuba riders have also reported a lack of frame flex under heavy loads, an unnerving feeling which I have often experienced when pushing the Big Dummy to the top of its weight capacity.

On its third model now, Yuba has listened to feedback to advance and refine its design. The frame can now be purchased separately for full customisation or purchased complete with a 21-speed drivetrain for hillier terrain. Disc brake tabs are now provided on both for anyone wanting to upgrade from the standard v-brakes.

My ride of choice, the Surly ‘Big Dummy’ is another longtail cargo bike from California with its roots in Xtracycle. Abbreviated backstory: when Xtracycle contacted Surly about whether they were interested in making a solid one-piece longtail bike that was compatible with the Xtracycle accessories, Surly jumped at the chance. The result was a sleek, army green frame, with curves that had bike geeks drooling over their keyboards.

The Big Dummy frame lived up to the hype. Despite being made up entirely of steel (4130 chromoly) and being able to carry up to around 180 kg/400 lbs of combined cargo and rider, the bike is nimble, fast, has a well balanced frame geometry, clearance for 26 x 2.5″ tyres and mudguards, performs well off road, can be geared down low enough to tackle steep grades, has no chain-ring clearance limitations, the 425mm axle-to-crown cromoly fork can be swapped for an 80mm-travel suspension fork without radically altering the steering geometry, it works well as a touring bike, and the frame supports disc brakes, Rohloff hubs, multiple water-bottle cages and has a kickstand mount. All in all, there is little that the Big Dummy can’t conquer. The only drawback being that the quality is matched with a befitting price-tag. 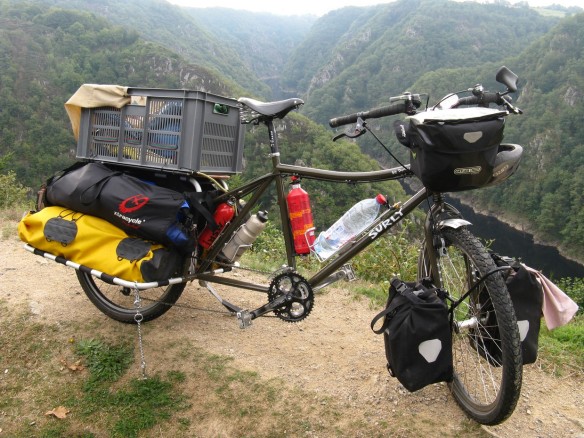 The beast... Fin's Surly Big Dummy in the Gorges of France

Break it Down Now: Surly Big Dummy vs Yuba Mundo

And the Heavyweight Champion is…

There are no clear winners here – both bikes are excellent in their own way, and between them they should cover most people’s cargo hauling needs. Where the Surly Big Dummy went for versatility and the deluxe, the Yuba Mundo went for extra strength, affordability and scalability.

Would I have chosen the Yuba over the Surly had I known about it at the time? Probably not. My customised Surly Big Dummy has performed admirably on tour, allowing me to tackle climbs up to 18% grades under heavy loads and difficult off-road sections with doggy luggage on board. But for those that are just after a rock solid cargo bike without the bells and whistles, at around half the price the Yuba Mundo is a mighty tempting option.